Publishd by Duraimani Time 2:32 AM
Tags
FIR Letter Format
FIR Mobile Phone
Letter to Police
Looking for sample letter format to register a police complaint regarding your mobile stolen or lost somewhere? In this article, you can download a sample letter that a boy used to register FIR with police station. Read the article completely and use your best judgement to write a meaningful letter. 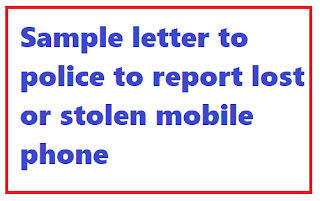 We lived in Tirunelveli 2 years back in 2015. There was a boy near our house studying 12th standard. He used a costly smartphone iPhone. He used to carry the mobile phone to the school where he studied. The iPhone was actually presented by one of his relatives. His father is very strict but his mother is not strict as much. His father advised him not to use this iPhone though it was presented. Also as he was studying H.Sc, his father told him to keep the mobile in suite-case and after completion of 12th standard, use the smartphone. But the student sometimes went with smartphone without his father knowledge. One day, he used to carry the iPhone in School and returned back to home. When he opened his bag to carry out the iPhone to put it back in suitcase, he was very much disappointed that the iPhone is stolen. He confused a lot and how to find it. He told the matter about the mobile lost / stolen with his mother but hide from his father. Also he approached us and told the situation. We advised him to lodge a complaint about the lost as we suspected that it might have been gone by theft in school. He rushed immediately to the police station with his mother and made a police complaint as the iPhone is very costly. In the letter format, he indicated his IMEI number for smartphone and the SIM number that was put in the iPhone. After two days, the police called him and returned the smartphone. Also there was the thief caught by police. Thief was nothing but his classmate. He shocked! And the student thanked the police left the police station. This was the story. Now the model letter he submitted to the police station may be helpful to you, if you want to register a complaint. The format goes below:

Respected sir,
I am H.Ramar studying 12th standard in Sankar Nagar Matriculation Higher Secondary School. I am currently residing at the address provided above. I lost my iPhone 7 when I return back from the school today evening 05-10-2015. I suspect the phone may be stolen at the school itself. I have also informed the matter to the School management. The IMEI number of my iPhone 7 is ___________ with the serial number _________________ . The approximate value of my phone is Rs.60000/- . So I request you to kindly register a complaint and give me an attested copy of FIR so that I can block the phone number and misuse of my phone by thief through my service provider. I shall be obliged if you kindly take action to trace and recover the lost iPhone 7.

Note: The address and other personnel details like school, address of police station, etc given in the letter format are not true and used only for the purpose of writing the sample letter though the theft story is real.